On the ethics of having children

While most aspects of childbirth such as pregnancy, abortion, and child rights and custody involve passionate debates, the very act of producing offspring has escaped such scrutiny. In this piece I seek to explore if it is ethical to consciously have children at all.

When you ask someone why they had children, most reasons go something along these lines -

Most of these reasons can be described as “self-centred” reasons. You want to change something to be in a certain way. This could be either for survival or the potential to increase your standard of living or happiness. 5000 years ago, having kids could increase your chances of survival. Given an option between dying at 40 unable to work and having a few kids who can hunt/farm while you retire; most people will choose the latter. However for an increasing number of humans today, this is not the case. Our survival is not dependent on us having kids, though they might aid in our aspirational goals. Or you see yourself playing a role in the survival of our species. You want humankind to flourish - and your children will be a means to achieve that vision.

If you choose not to reproduce, you would be breaking a 3.5 billion year long chain starting from our single celled ancestors where everyone reproduced but you. Surely your hundreds of millions of ancestors couldn’t all be wrong? If you believe humans are no different from animals this is convincing. In the recent past though, we have strayed significantly from our animal brethren. Kill or be killed - which is the rule of nature - is not how we live our life. We recognise basic inalienable rights every human possesses. We have a framework for what is moral and ethical. Humans have the ability to shape their life and world according to what they believe is right. This sets us apart from animals. We use higher order thinking to override our basic instincts. Our developed brain ensures we are not a slave to our primal desires. We respect the rights of individuals. Even in times of war there are some protections we confer to enemies of the state on humanitarian grounds. Our current understanding of ethics should hence be applied to having kids - instead of blindly going with what is “natural”.

Life is often described as a gift and parents are compared to gods for having bestowed it upon us. But not all gifts are created equal - some require investment on the part of the receiver and can feel cumbersome once the initial excitement has worn off. Just like gifting someone a live animal would entail handing over massive responsibility, the gift of life shouldn’t be given carelessly. In cases where the recipient is not equipped or enthusiastic about the gift it would be impertinent to present it to them anyway. The key here is the “consent” of the recipient. Taking this analogy to that of childbirth, we can see that the recipient here is not born and it is thus impossible for them to give consent to being born. If you want to borrow your neighbour’s lawnmower and they aren’t home (i.e. they are not available to consent) it would be ill thought out to take it anyway. If the person from whom consent is sought is not in correct state of mind (say, drunk) or under a certain age, the law dictates that the action that requires consent cannot be carried forth. This applies to sexual consent, consent for medical procedures, laws related to property ownership transfer, to name a few. In cases where there is a probabilistic factor involved (either your child is grateful to you for having given them life or curses you for having signed them up for something they couldn’t care less about) we tend to err on the side of caution.

In simple words, it is not about what you want as a parent. A person should have entire control over their life. No third person should decide when they are to be born or to die. Yes, you may end up with a child who doesn’t care, and who appreciates life. Or one day that child might read this article and walk up to you to ask some hard questions. You better have some good reasons because I doubt they would find satisfactory the fact that they are meant to be a vessel to fulfill your personal desires. And to be fair the world is pretty shitty place. Some have fun, some find pain. Some are able to trick their brain into believing all of it has some “meaning”. Even if such a meaning exists, relatively few are able to find it while the rest take the strategy of trying not to think about it.

While morality and ethics can be deemed somewhat subjective (killing chickens is ethical for some, unethical for others), there are some things we universally recognise as unethical. You are not allowed to kill another person no matter how much meaningful that would make your life. Their right to life takes precedence over how much happiness taking their life would provide you. The moment you sign your child’s birth certificate, you condemn them to a life they may not have asked for and the reaper signs the death certificate with an as yet unknown date. While it is a famous meme among millennials about not wanting to live, it serves as a coping mechanism for the large number of issues people are facing. If you choose to have a child, be prepared for a scenario where they say they don’t want to live because they didn’t ask for it. It is not possible to reverse the action of birth. Suicide is against the human survival instinct (and the law) and is likely to inflict a great degree of emotional stress on the person involved. And unlike the summer camp your parents signed you up for without asking, it doesn’t end in two months.

So are there any reasons to have kids? If I want to carry a gun I need to have a strong reason for it. This is because other humans could potentially be harmed as a result of my decision. We decide to exempt some humans from this rule to carry weapons. In interest of preserving law and order it is necessary to give guns to police - there is a strong reason. In a similar way, by choosing to have children the burden of proof should be on the parents who decide to have them as to what strong reasons they have for it. A person who chooses not to have children shouldn’t have to explain why. You could also proceed if you dont care about ethics and want to have kids for self-centred reasons. Alternately, and I think this is a large majority - you simply follow the herd and don’t think about hard things. 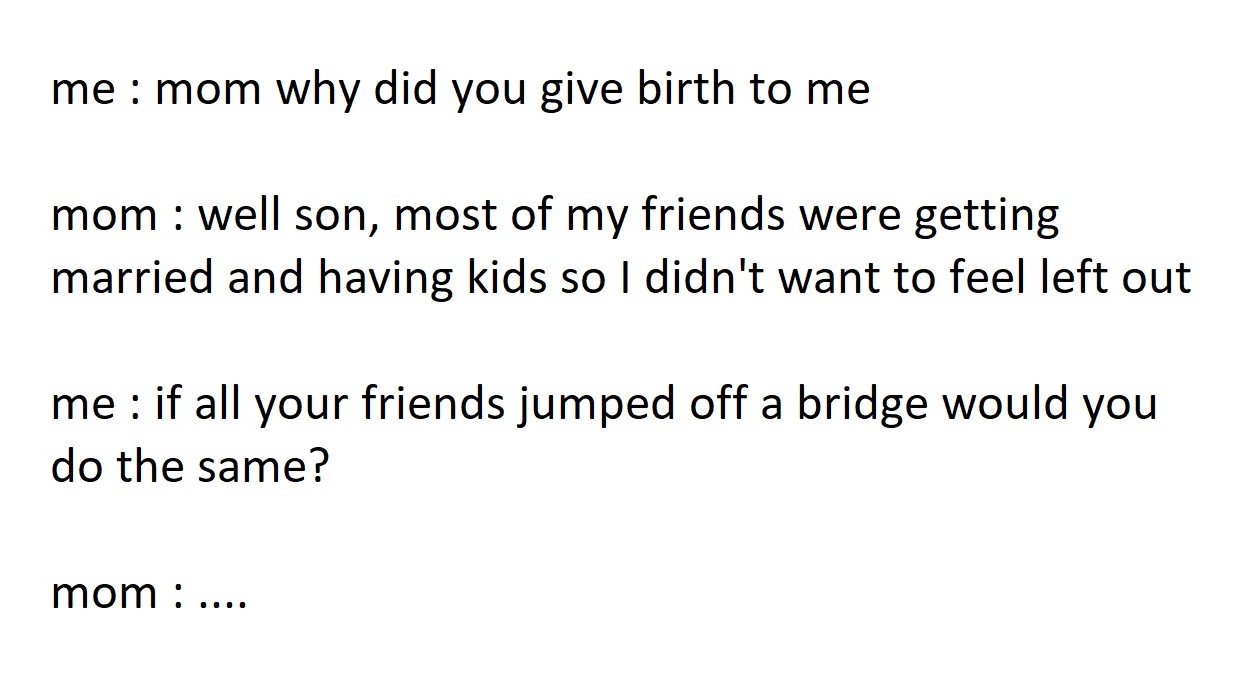 To be fair, going against the status quo is hard. Not everyone can pull off a pink shirt in the office. You choose to pay the bribe since you want your work done even though you’re against it ethically. Societal change takes time and humans take the default road 99% of the time. Most of us live cookie cutter lives (school->college->job) so it isn’t surprising that most follow the herd in this matter. We wouldn’t be able to deal with the far reaching consequences of going renegade on this matter. Also, logic dictates that such ideas are self-regulating. If these ideas become mainstream and a large portion of the population stop having kids, they would eventually die out. The only ones still reproducing would be the ones who want to have kids and they will end up dictating the status quo.

This makes me wonder if The Great Filter could be an ethical one. Our current ethical framework is riddled with paradoxes which are impossible to reconcile. To counter this, I envision a future where we genetically engineer our species for less existential dread and more subservient individuals who dont question the status quo.

To conclude, the matter of creating children is not as cut and dry as it appears to be. A lot more thought needs to go into the act of creation by each aspiring creator. Be sure about what goals are, and what you intend to derive from the action. You will be answerable to your creation, so be prepared to face the consequences in case your creation doesn’t share your thought process.